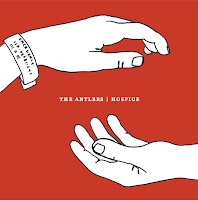 Hospice (3.09, Self Released)
Byline: Best album of 2009 so far, maybe until dec. 31st.
For: Neutral Milk Hotel, Antony & the Johnsons, The best moments of concept albums like Five-Eight's "The Good Nurse" or Cursive's "Domestica"
So much of the reception of music is tied up in physical location and mood. Listening to The Antlers for the first time was one of those moments in which all four elements converged into a perfect storm that allowed an album like Hospice to seep into my soul. I was driving to Salt Lake City from Seattle to find an apartment for my bride to be and myself. Having read a glowing review on Forest Gospel, I decided to pick up Hospice a few days earlier to listen to on my road-trip. I ended up listening to it 3 times, not to mention the times I repeated the tracks "Bear" and "Two" over and over. The first time I listened to it I was immediately swept away by Peter Silberman's haunting falsetto rising out of a beautiful cacophony of swelling guitars and electronics.  I was driving through the sprawling fields and farms of Central Washington. The songs rise and swell from pretty little claustrophobic moments where Silberman is breathing into your ear to the most triumphant crescendos of The Arcade Fire. The second time I listened to it I was driving through South Eastern Idaho in the middle of the night. Without any visual distractions I was cornered with Hospice, and thats when it decided to bare its teeth. Hospice is not an album to be taken lightly, the running narrative deals with the grimmest aspects of aging, dementia, the obligatory disconnection that comes with old age, primarily dealing with two characters, the narrative perspective shifts between a young hospice worker and the patient dying in the Hospice workers care. I can't think of a more humbling experience than to provide care for those who are dying and want to die. The subject matter is not easy to get through, all the physical ugliness of humanity is coupled with the overarching beauty of humanity and the power of connection and memory. When you get the album it does something to you. It is the most emotionally resonant projects I have heard in a long time, almost on the same level as Arvo Part's Alina or Jeff Buckley's Grace. Hospice  It is a powerful humanist  statement set in one of the most overexposed yet less understood setting of the hospital and the even more written about yet even less understood concept of dying. I fear that writing about albums close to my heart may reveal more about myself than about the album, but with the fear of over exposure I can't help put this out there.
Stream Hospice, download New York Hospitals EP and Cold War EP
Posted by Heligator Records at 8:41 AM