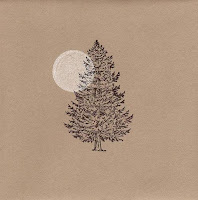 Searchlight Needles (06.09, For Arbors/For Satellites)
Byline: New Weird America Experimental folk from the heart of Old Weird America
For: Songs:Ohia, Tiny Vipers, Early Cat Power
"It was very still. The tree was tall and straggling. It had thrown its briers over the Hawthorne-bush, and its long streamers trailed thick, right down to the grass, splashing the darkness everywhere with great split stars, pure white...The dusk came like smoke around, and still did not put out the roses." D.H Lawrence, Sons and Lovers.
I know you are probably sick of reading what else I was doing when I hear an album for the first time. But it was eerily uncanny how fitting this passage by D. H Lawrence was when I sat down for my first listen of Searchlight Needles. Searchlight Needles by Brooklynite by the way of Missoula, MT chanteuse Jasmine Dreame Wagner a.k.a Cabinet of Natural Curiosities. Searchlight Needles is a quietly epic ode to the great expanse of nature. It says a lot about an album that can physically move you to another location, with CONC, such auditory hallucinations take me to the woods, the ferns, and a windswept hillside in the middle of the night. This seems like an apt follow up to Sunn0))) right? There is more in common than you think. Rather than being a straight up love poem to Mother Nature, Searchlight Needles strays away from its idyllic home in the woods and gets lost like a stray lamb in the unforgiving hills, a lost little lamb amidst the frightening expanse of the unprotected world. Jasmine Dreame Wagner wraps her little voice, which at times recalls Julie Doiron and others Liz Phair's, and her delicately plucked guitar melodies in an aural sheen of found noises, children's voices, and organic sounding electronic arrangements that brood just beneath the surface threatening to overtake the track like a circling wolf. Eventually, around the middle of the disc, we are overtaken, the experimental tendencies beneath surface take center stage with circuit bending electronic experimentation, meandering riffs and sparse drumming and spoken word poetry. Wagner's voice is spot on for experimental folk albums like these, at times hypnotizingly rich while gently riding the swells of each plucked chord and out there electronic palate, and other times confidently fully revealed and stark. So, if your fans of any of the musicians I have mentioned in this review or anyone somewhat associated with New Weird America or any of the artists in or associated with Phil Elvrum, I would confidently recommend this album. Plus, this comes out of Missoula, MT (by the way of Brooklyn)! A place that has a special place in my heart. And, Wagner is an accomplished poet, along with the press release and cd, For Arbors/For Satellites sent me a copy of her published poetry. Kudos to both!
For Sparrow
Ryan H.
Posted by Heligator Records at 2:02 PM